Well, it's been an amazing summer. Because of my injured hip we decided to add a first floor bedroom wing and that, the garden and pottery have been plenty to keep me busy.
I started a soda salt firing group on Yahoo for other soda/salt firers or anyone interested in vapor firing. The URL is:


You have to be approved to participate and that is only to avoid spammers.

I just fired my kiln Friday and will be unloading tonight or tomorrow morning. Our dog Shanti has been fighting a massive eye infection due to an abcessed tooth and we need to get him to the vet again late this afternoon so he can have that tooth extracted tomorrow morning, so the kiln may have to wait until tomorrow to be unloaded.

I tried a new technique in this firing, using some salt along with the soda and a few ounces of borax, because my usual method of spraying the water/soda solution was not an option right now with all the hip pain I'm experiencing. So instead, I made a paste of the mixture and spread it on pieces of scrap wood and introduced them into the firebox.

From my peek into the kiln this morning, it appears that that was too much salt. Some of the pots are way too dark - sort of sewer tile brown - not what I would have expected on a white stoneware! It also looks like the area under some of the lids is lighter color, which is definitely not going to work. I'm assuming the salt did not hit there and those are going to be strange looking pots! At this point I'm wondering if firing them in the electric kiln at a bisque temperature might help brighten them, or if they will be a total loss.

I'll try to get some pictures taken of some of these pots and post them on the yahoo group and maybe here as well if I get the time.

Happy Thanksgiving everyone!
No comments:

Well, I'm finally getting back to work! My hip is still a mess,as a result of the bad fall which gave me a badly sprained ankle along with a possible stress fracture; but I can't sit and plant with this rain (which is the only physical activity I've been able to do since this happened), so I'm heading for the studio today to do some throwing - at last!
It's been an incredibly busy summer of planting while sitting, and planning our new first floor master suite. (If you missed the story behind the accident that started this project and your have a lot of time on your hands, you can scroll down for the details!) :-)
I thought I was almost done planting and then the earth moving machinery arrived last week along with the bad news that all the plantings I had put in on the hillside behind the house had to be dug up so they could grade. So now those plants are waiting for the first dry day for me to get started on the replanting!
Since I've been very antsy to get back to work, any planting is only going to be alloted an hour or two on any given day so I can get in studio time.
I also have a new EZCube and want to get a few more pictures of some pots to put up on my web site. That's the other thing I've been doing this past week - trying to redo the web site. I'm a lot happier with the home page now; but it will take a while to finish it. Wish I knew more about HTML so I could create the page that is in my mind!
The unintended consequence of the accident was that I had all this time to plant,since it was something I could do sitting down; and my garden is looking incredible this year with all the new plantings. This is year 2 for most of the garden and I'm amazed how well it's doing, especially since I lost so many roses due to the early summery weather followed by a hard frost which killed and badly injured many plants. Even the Japanese maples, a couple of other shrubs and some of the fruit trees which looked dead are showing signs of new life! So our losses weren't as great as we first thought. I will have to replace a couple of fruit trees; but that's all.
Well,that's it for this month. I'll try to get some garden pictures taken as soon as the sun comes out again and post them here. We've been getting a lot of much needed rain this week and last, which is most welcome!
No comments:

It's been a crazy few months - heavy work cycle leading up to the December studio tour, post tour cleanup and then getting ready for Christmas. Right after recuperating from a month long virus in December (fortunately it hit me late Christmas day),in middle January I was getting ready to get back to work in the studio when a sad little dog showed up at our door step late one night. After a couple of weeks trying to find his owners, we realized that the universe had given us this sad, frightened, traumatized little terrier. If that wasn't enough for the little guy, our other dog decided that he was going to try to get rid of him by being downright nasty. Needless to stay, my hopes of getting back to work were put on the burner while I got this new member of our family, who we named Bodhi, acclimated to our household. I tried to take him into the studio; but the studio cat Shino,immediately determined he was an enemy interloper and started attacking him.
Since my husband is allergic to this homeless cat who adopted us last summer, we had no choice but to take the new family member back into the house and let the cat maintain reign over his domain (the studio) until they got to know each other better. That also meant that I had to stay close by until everyone got used to him and he got used to his new surroundings and new house mates.
It's obvious the little guy had been abused and even the presence of a fly swatter sent him into uncontrollable trembling. Now after a few months, he's settling in beautifully, even willing to fight back a little with his nemesis, our Lhasa Apso Shanti tries to bully him; but most times Bodhi makes every effort to avoid conflict and remains his sweet gentle, self.
The vet, after a series of tests, shots and thorough examination, said he was healthy and determined his ago to be about 1 1/2 to 2 years. So it looks like we can enjoy many more years with this little guy and the vet can take a nice week end getaway on our fee!
Since I couldn't get in any studio time, I got started early on my seed starting and now I'm up to my ears in vegetable and perennial plants which are taking a lot of my time and a lot of house space.
We had an unusually warm March to the point that trees and shrubs were blooming too early and then the deep freeze arrived. I managed to save a lot during that first freeze, covering pots with old boxes, quilts, remay - whatever I could get my hands on, but we lost a lot of this years crop from our fruit trees, some of which were totally denuded by the cold and we also lost some roses and perennials which I'm now in the process of replacing.
We were fooled into thinking that the unusual cold spell was over and we uncovered the plants several days later to find that we had saved a lot of them; but then a few days after that another hard freeze was forecast. I took a deep breath, ran up stairs to grab am armload of quilts hoping to at least cover some of the more tender things. Well, I was in such a rush, that I missed the last step to the landing, went flying and wound up with a severe ankle sprain. And the only saving grace was that the hard freeze didn't happen.
So, after a week on crutches, and sitting with my foot elevated and surrounded with ice packs, I'm now able to hobble a little, which is an improvement from the step, drag the injured foot,I was doing last week. I called it my "The Mummy" walk imitation; but I still can't get into the studio to stand and wedge. All I've managed to do it grab some clay and make a lot of cone packs! So I'm back to gardening which I can do sitting down and I'm getting a lot done. I'll try to take some garden pictures this summer and post them here.
I've given up all hope of making and firing pots for the spring tour; but the garden is filling up fast with all this planting. It also gave me time to do what was necessary to get the kitchen remodel finished (the last of the granite backsplashes will be done Monday).
I also had plenty of time to design our new bedroom wing. This accident was a big wake up call; and we decided that at our ages, a first floor master is definitely the way to go; and it's also just in time for our ten year old Lhasa who is now finding it frightening to go down the steps lately.
I got one of those EZCube setups right before the accident and I'm eager to try it, so as soon as I can I'll try it out and take some pictures of a few more pots from the last firing. In the meantime I'll keep planting until this foot heals and I can get back to the studio.
1 comment:

Here are a few pictures from the last soda firing. The top of the kiln is still too hot after a few bag wall and chimney adjustments, so I'm going to add at least another foot to the chimney to try to resolve this uneven firing.
It's been a very busy year of studio work and ongoing household and garden projects which will extend into 2007; but the house and studio and grounds are coming along nicely. I'm definitely looking forward to spring and the fruits of all my planting!
Got my new Wolf range installed a couple of days ago and now all that the kitchen needs are new counter tops and a new sink to be finished.
In the spring we'll be lifting part of the gambrel roof in the upstairs bathrooms and redoing them, so they'll be more user friendly to to the tall members of this family. 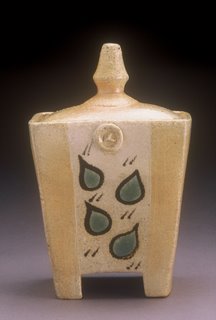 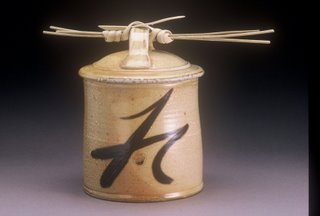 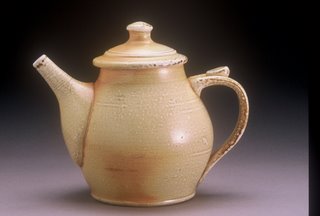 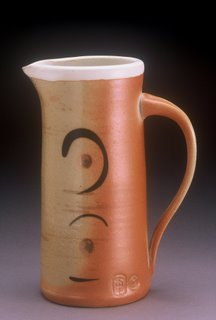 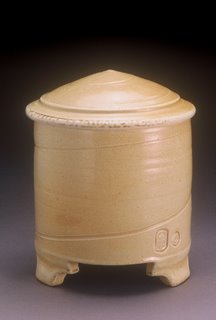 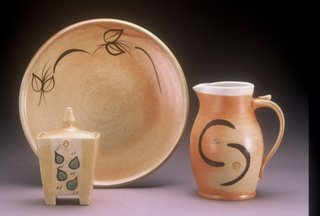