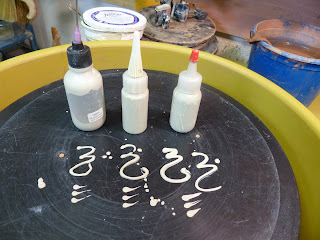 The first thing I did in the studio yesterday was to take out three slip trailers to test the pea green slip I wanted to trail on some of the black slipped cups.The middle container will be the one to use. The opening was just the right size to make it flow nicely - not too thin or too thick. I wasn't sure of the thickness of the slip, which was like a loose yogurt; but it seems to be a good consistency. The three test pots I dipped in the black slip were too wet and fragile to hold, and tilt so I could do the trailing lines with the pea green slip, so I just used a piece of cut out plastic credit card to make a quick swirl on both sides of the cup to test the cut out and to see how I'd like the contrast of the bit of red body color coming through the black slip. The cut out credit card will work fine, but I have to position myself and the pot a bit better than I did.

Yesterday was a busy smorgasbord kind of day - the usual blog and email chores with my first cup of tea, baking a loaf of no knead sourdough bread after breakfast, ordering a couple of studio supplies on line, and putting more decorations on the tree. After a plowman lunch with the freshly baked bread and some cheese, I headed to the  studio for remixing my black and pea green slips and testing the green slip and stopping at 4 o'clock to make French onion soup for dinner.

Some of the things I ordered yesterday were a small Talisman 120 mesh sieve from Axners, and a  flexible ruler which seems like a handy tool and a lid caliper Bailey's. From U.S. Pigment (they have great prices on stains and other raw materials), I ordered a couple of pounds of black stain and pea green stain. I love those little Talisman test sieves and have them in several sizes. I was happy to find the 120 mesh in the small test size to use for test slips or just when I need a cup or two of slip for trailing.. For larger batches of slip I have a larger sieve but why bother to clean a big sieve for a small test batch.

Tonight I'm making tempura and rice for dinner. l got my veggies prepped and shrimp cleaned after breakfast and was hoping to get a full afternoon in the studio; but dealing with others things like my camera not being recognized by photoshop elements. Still haven't solved the problem but I removed the memory card after several tries and that did the trick.

I have to admit this new slip trailing skill I'm attempting to learn is scaring the heck out of me. This feels like a long learning curve ahead. I'll wisely practice a bit more on a clean bat before I start on the pots; and I'm not looking to do anything precise - just some gestural trailing. A painter I'm not! I have the baby step of making dots down pat, and some small gestural lines, I think! But, it's time to try trailing a horizontal line on a vertical pot. I shutter to even think about what can go wrong! Maybe I should have made those test cups smaller! :-) At least the cup that I slipped in and out didn't collapse, even though it looked a bit touchy for a while!

I remember seeing one of Tony Clennell's blogs with a photo of a bunch of mugs that had melted in a puddle after being slipped in and out, so I was aware of that pitfall and hoping the pot was leather hard enough and the slip the right consistency. It was a little iffy there for a bit but I got lucky this time.