The Good the bad and the ugly

The firing is kind of what I expected with a couple of unpleasant surprises, which is why the blog today it titled "the good, the bad and the ugly! 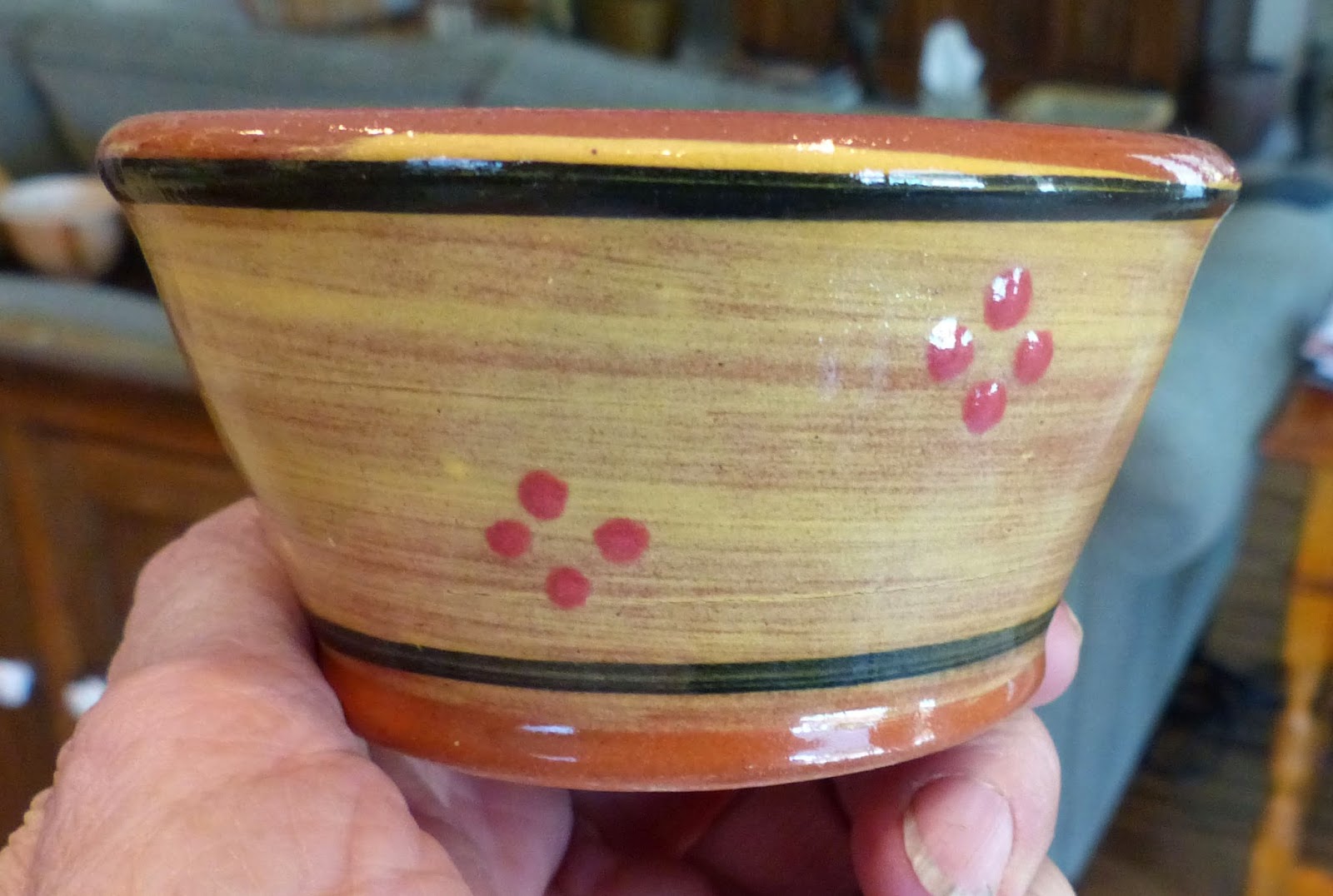 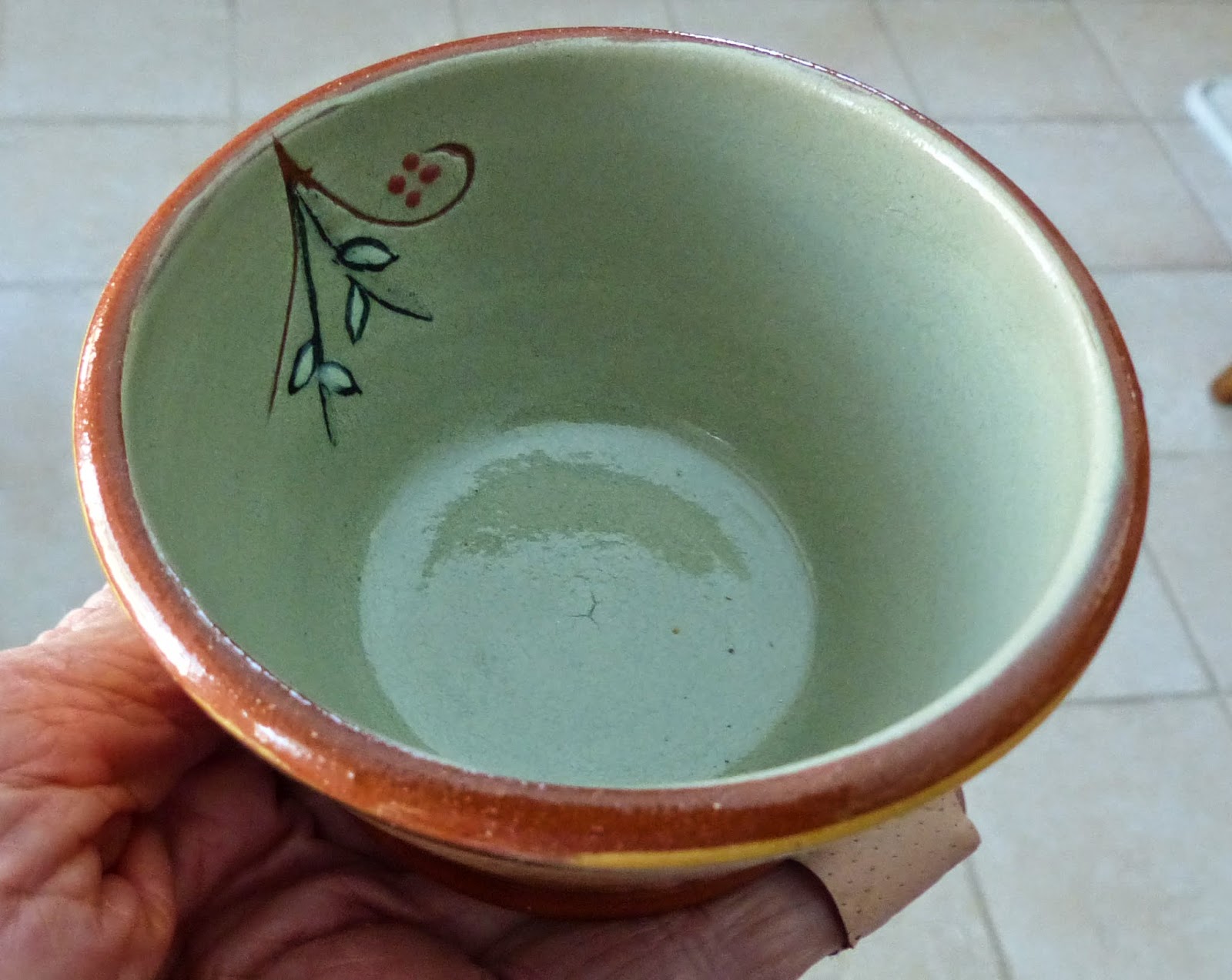 The best pot, or my favorite in the firing is this tiny test cup. Like Mary Poppins, it's practically perfect in every way. I love the color and design combination and will use it on larger cups and bowls as soon as I can throw again. 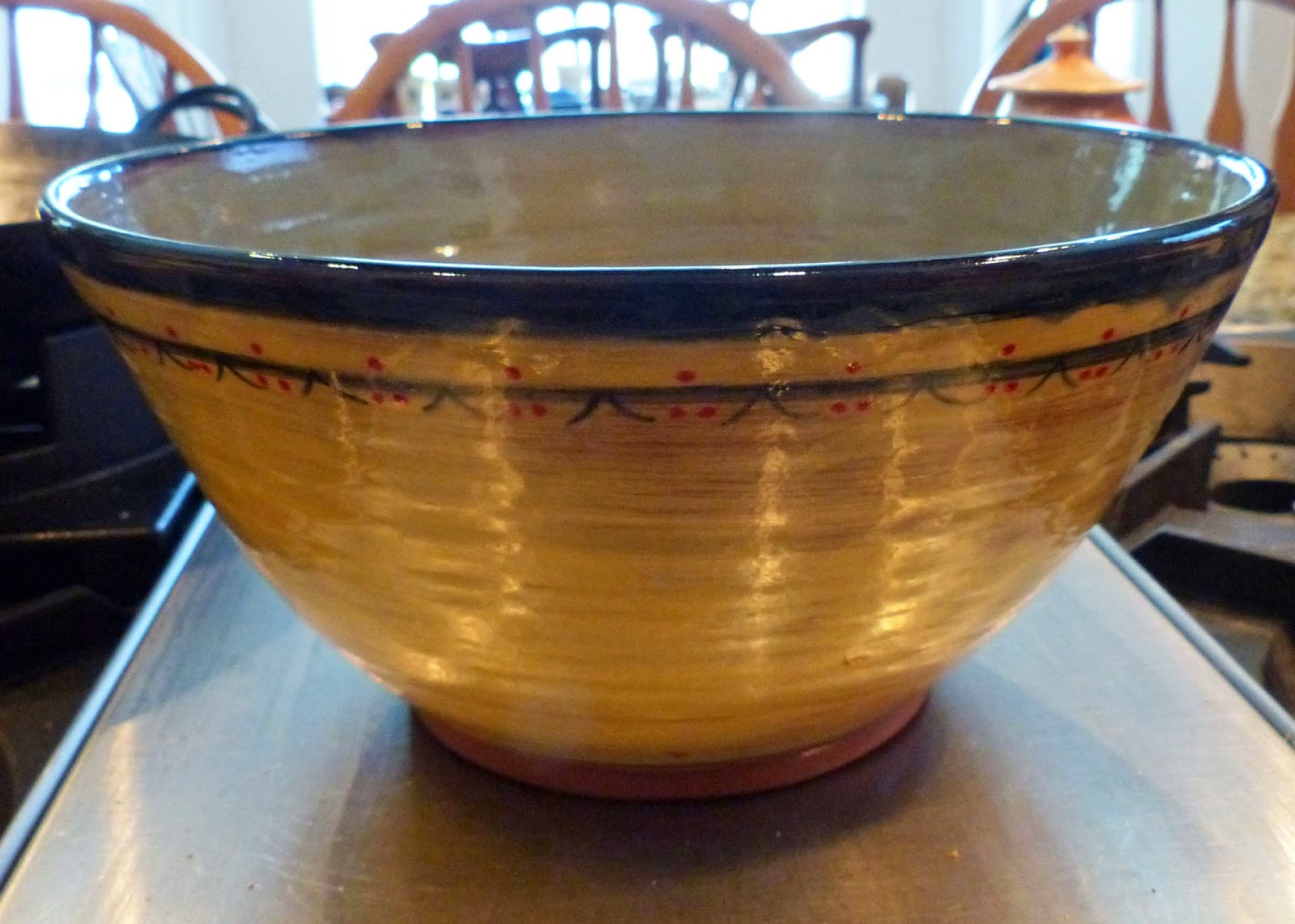 Jim and I love this bowl which I made for us since my only big bowl met it's demise a month or more ago when it become at one with the kitchen tiled floor and broke into enough pieces that only a mosaic artist could appreciate. I'll put a big price tag on it and that should keep someone from buying it tomorrow. I love how brushing the slips with the intent of having some of the red clay show through works, so I'll be doing more of that. My pea green mason stain, used in a low percentage is a slip color I will keep. I love it and it works well with the gold. 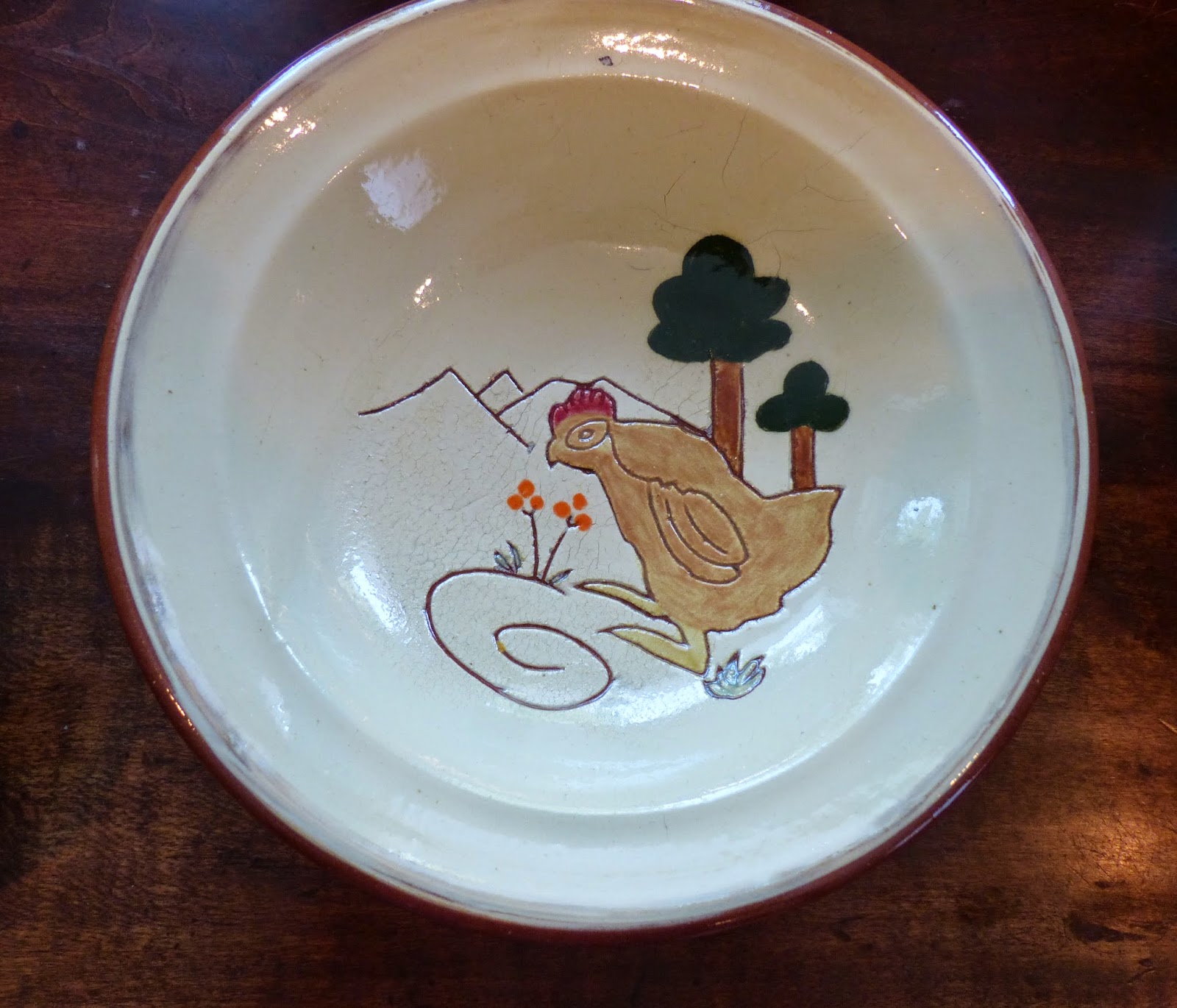 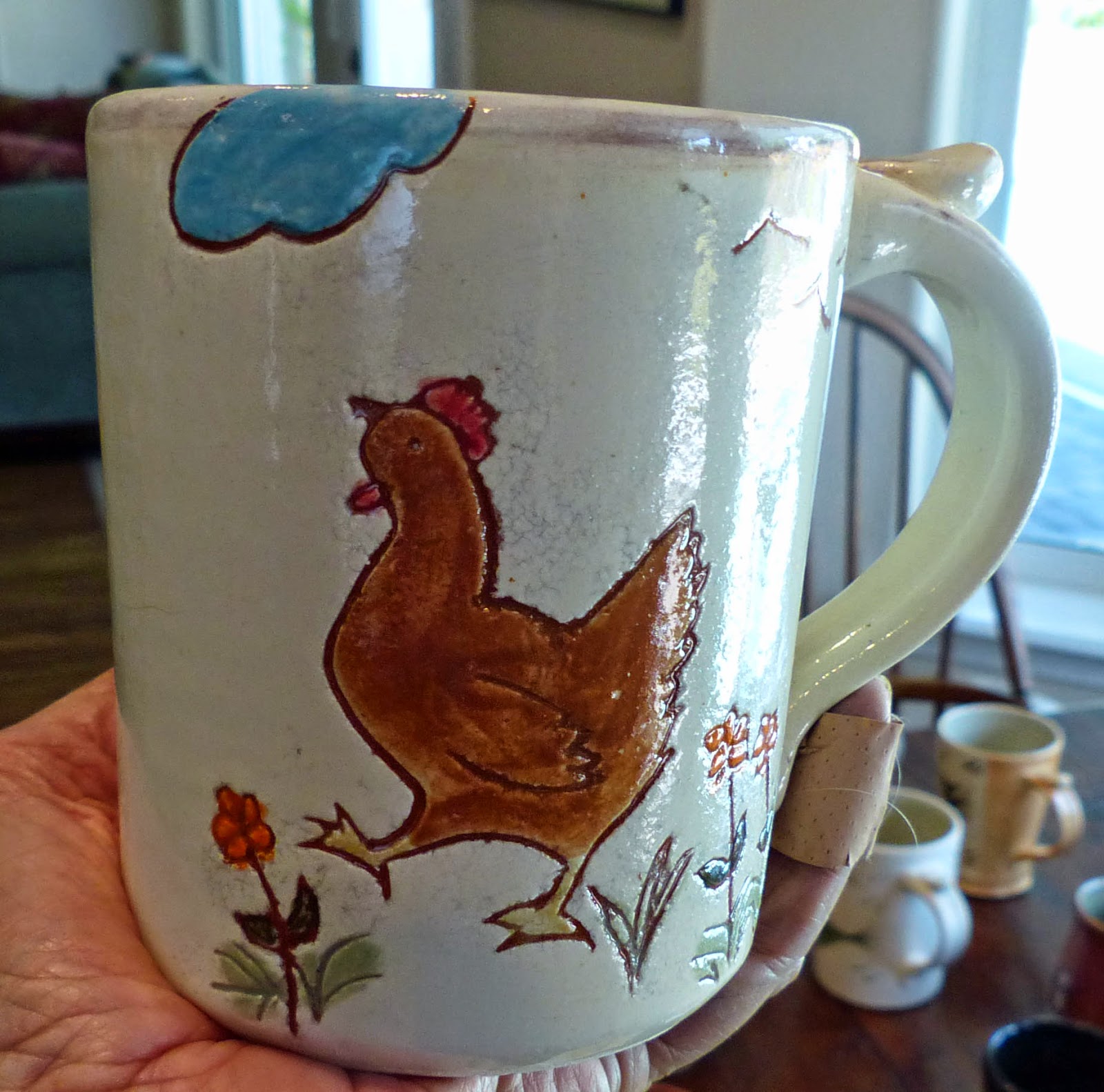 One of the bad ones is this bowl with the Axner red under glazes crawling, pooling and running; and I have no idea why this happened. 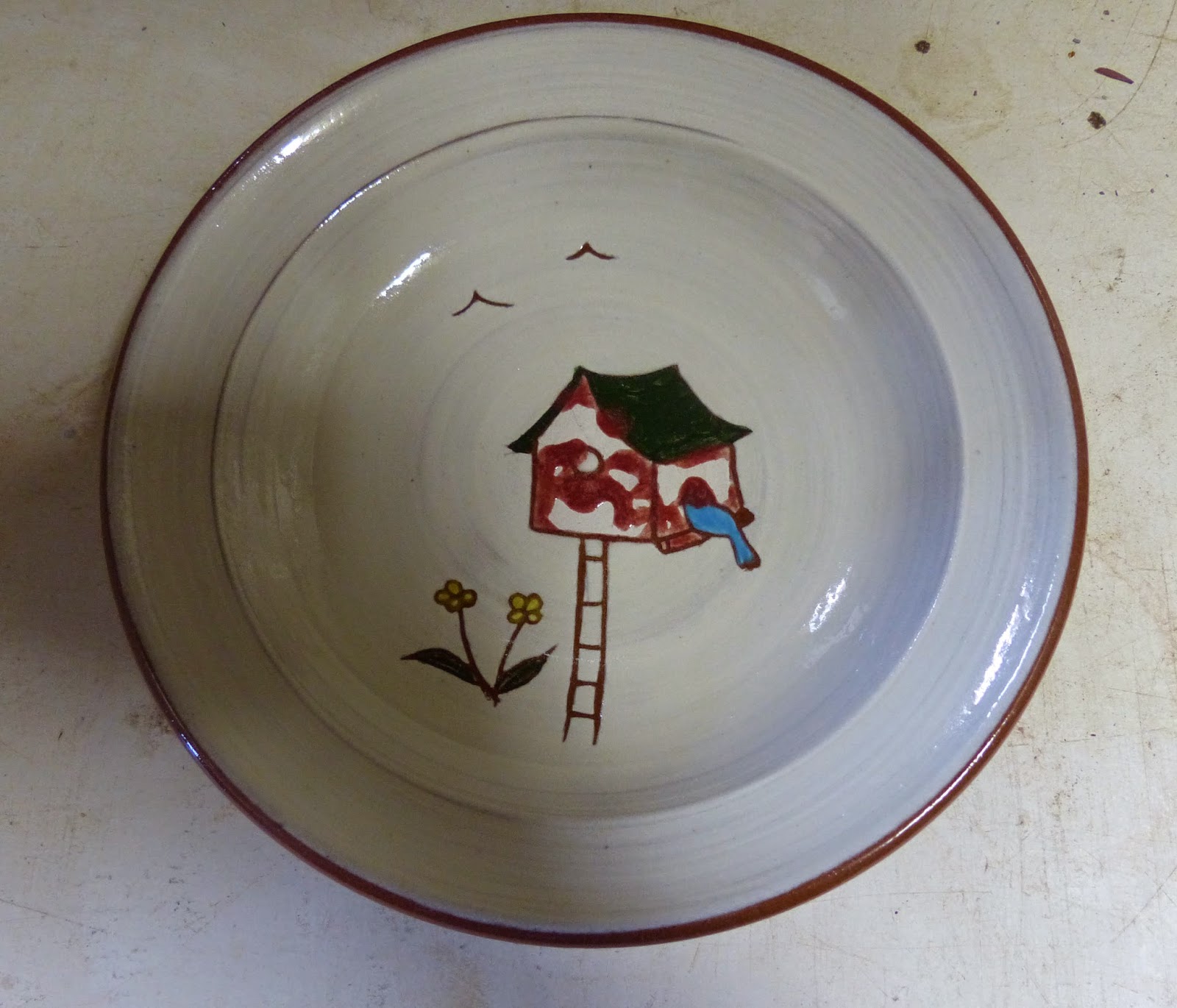 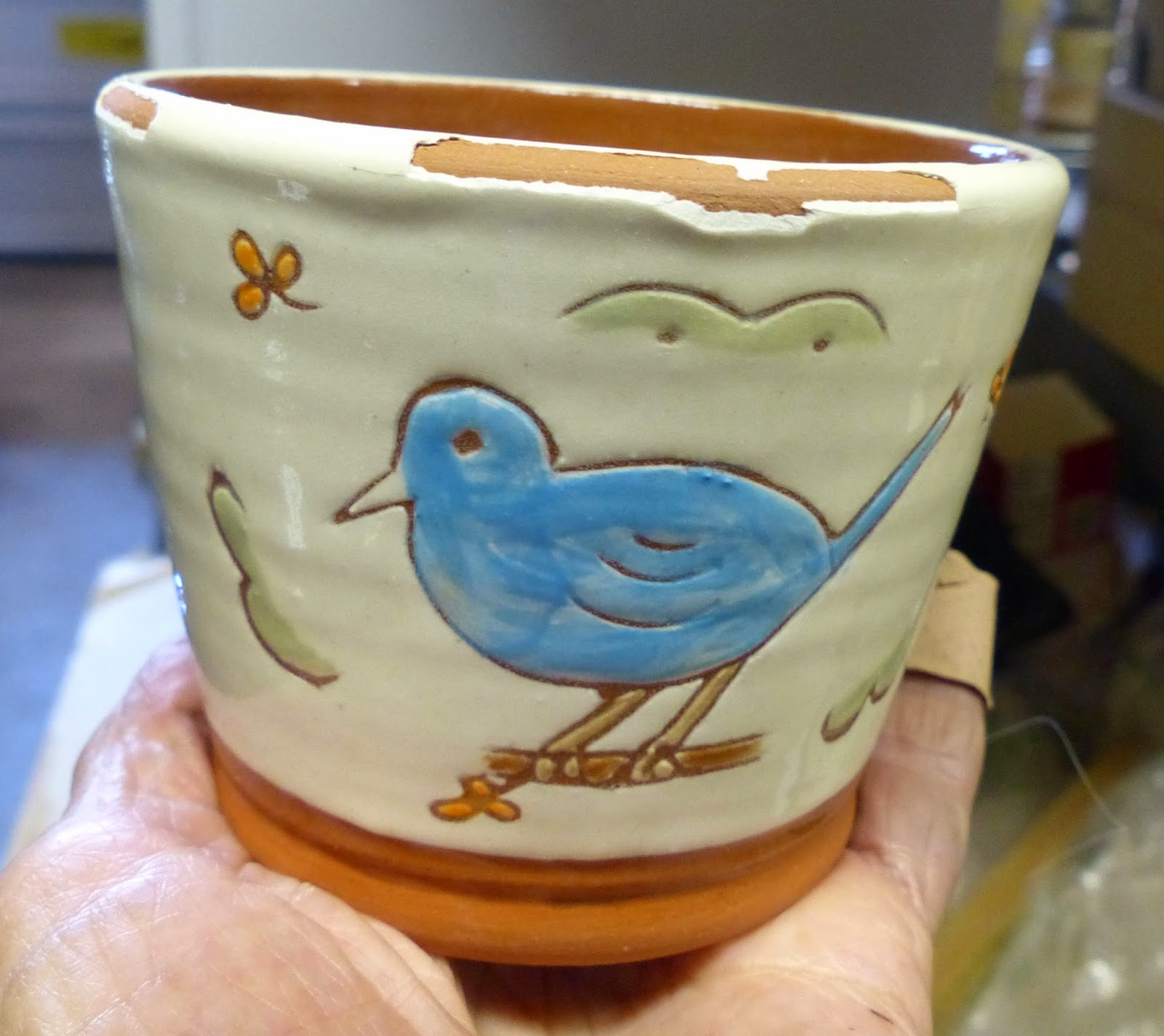 Another bad puzzler is why the bisqued slip and well dried glaze jumped off this pot in the firing. It is certainly a puzzlement. It happened on a couple of the pots. I'd love to know what caused this so I can avoid it in the future. I'm just grateful that I made a lot of small experimental pots at this early state of my working with earthenware. It certainly is a different experience than high fire and soda fired work.


I will spare you the ugly!  Actually, there was only one ugly - just way too much of a good thing because I didn't know when to stop decorating! All was well until I decide it need a bright blue center. Bad decision!

When I opened the electric kiln to see how the firing went. I already knew that there was a problem with the Ayumi slip on many of the pots. I slipped some of those at the pretty hard leather hard stage and when bisqued, the slip crazed. A lesson learned on this earthenware journey. But, I wasn't expecting to see the other problems that showed up in this firing. It was definitely a WTF moment looking at some of these pots.

Some pots as one example shown above, had little chunks of slip and glaze pop off.  I glazed yesterday, dried the pots outside and then fired with a 6 hour hold at 100 degrees just to make sure they were dry, and continued with a slow firing after that.I was sure that would work, and it did for most of the pots.

Some under glazes crawled and even ran on a flat plate in one instance (like the bird house pot above). The pots were clean, and sponged before glazing, so why did this happen on some of the pots? Was the under glaze applied too thick, or is cone 03 too high for them? But probably not the temperature since some others were fine fired at the same temperature. It's a mystery to be solved and re-solved.

Some of the under glazes applied to bisque and glazed over, were dry. Another WTF moment, since the rest of the pot was fine but the handle or knob on one pot not. These pots were dipped, so why was the same color under glaze dry on one part of the pot and not another?????? It's all a mystery right now.

The colors on the  test tiles were awful, but I wanted to test a 2% black iron version of a honey glaze on top of various slip colors to see how they would modify the colors. They did modify, but not only didn't offer anything, but made them look dull and brought in some funny speckling from the black iron on a few. Another good learning experience.

I'm eager to get back and make more pots now, since I do not give up easily  on anything; but this very injured pinkie has to heal before throwing, so maybe my initial attempt at soap making will come sooner than this fall. The swelling is down a bit more this morning, the purplish color is still present, but looks a bit more faded than yesterday. There's no pain and it doesn't feel like there's any nerve damage, so all is good. My only problem now is to figure out why those under-glazes acted the way they did. Hopefully some readers will come up with some helpful reasons and solutions for this under glaze problem. Please feel free to offer all opinions!